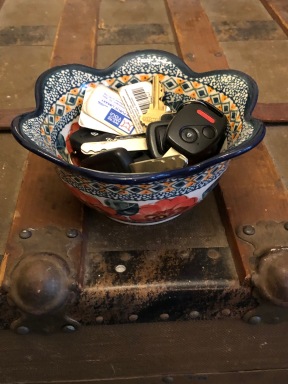 Sometimes I notice when I forget, sometimes I just forget.  Usually, it is not the big things like misplacing my car in a parking lot or forgetting to pick up my wife on time.  More often than not, it is the smaller, ordinary things like keys, a hat or glasses.  Like most people, I have created habits to help me with this little problem like always putting things in the same place when I come home.  Despite this, I still have occasions when things get left where they don’t belong and a certain kind of frustration sets in.  How could I have done this again?

Recently, I have been forgetting something else.  Something much more important.  In the cacophony of voices vying for my attention, I have begun to forget the still small voice of my heavenly father.  I should have seen it coming.  Maybe it was the bad habit of checking my phone first thing in the morning or reading the endless negative news feeds.  Whatever the cause, it got worse as the year progressed.  The panic of the pandemic became louder and louder in my ears while the creator of the universe seemed more and more distant.

One night as I lay in bed praying, I asked God to remind me once again of his love and protection.  As I was pouring out my heart, I asked to be able to hear his voice more clearly, more directly.  If only he could speak audibly and I could know for certain that my words were not in vain.  In that moment, I remembered something.  He had spoken, He is speaking and I had access to those words any time I needed them.  He even took the time to ensure that His words were written down.  He knew, even before I was born, that I would be forgetful and had prepared for that eventuality.

Knowing that God had spoken in general and that His very words have been recorded was encouraging, but not all that I needed.  I wanted to know specifics.  What was he saying to me at this very moment?  I had just been reading about Solomon.  Could I simply pray for wisdom and receive it? As I mulled this over in my mind, I was reminded of God’s command and promise in Romans 12:2

That reminder sounded great and was comforting, but it was still not enough.  If I stopped conforming to the pattern of this world, how was my thought life really going to be renewed?  I couldn’t just stop one bad habit without replacing it with a new one.  How was I going to start hearing God again?  What did He really want me to focus on?  Once again, he spoke through His word and reminded me of Philippians 4:8.

Shortly after praying this prayer, I came across the wonderful book by Hannah Anderson, All That’s Good.  Her stories of motherhood and ministry in a small town in the Blue Ridge Mountains unpacked this verse in ways that I had not considered.  Each concept came alive chapter by chapter with fresh insight and helpful illustrations.  Her words reminded me of a God who cares deeply about what and how I think.  He longs for me to sit at His feet and dwell on those things that bring Him joy and magnify His glory.

As I have been reflecting on what God is saying to me directly through His word each day, the chaos in the crisis of the moment begins to fade.  Like a lost and wounded sheep, I am becoming more attuned to the voice of my shepherd.  Oh, how grateful I am that He came to rescue me.  He has provided a way of escape from the voices that tempt me to doubt and fear.  My prayers no longer feel like I am shouting into the abyss, but are beginning to feel like a conversation that I have always longed for.

So, as I wake up tomorrow and the bad news waits to distract and discourage, I will continue my new habit.  Not just talking to God and baring my soul, but soaking in His promises and remembering His voice.  The voice of truth, nobility, righteousness, purity, loveliness, and so much more.  It is on these things that I will choose to focus.  Through the power of the Holy Spirit, I will do battle with the voices that tempt me to forget.  I serve a risen and conquering King and no disease, no economic disaster, no political problem is too big for Him to handle.

This site uses Akismet to reduce spam. Learn how your comment data is processed.